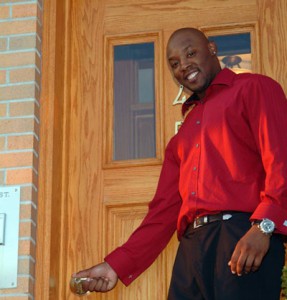 “Coming home is the best part of my day. There’s not a night I’m up worrying, because I’m at peace in my home.”
—First-time Homebuyer Jason Lewis

Buying a house was a lifelong dream for Jason Lewis. “Ever since I was a little child, I knew I wanted to own my own home.” On August 10, 2005, Mr. Lewis closed on a three-unit brownstone renovated by Bridge Street Development Corporation. That same day, he moved in to the duplex on the lower two floors of the house. “After waiting almost six years, it took me a few weeks just to get used to the fact that it’s mine,” he says, laughing. “I’m sitting here now thinking, I can’t believe it actually happened.”

Mr. Lewis, who works for Verizon in Flatbush, had been infatuated with brownstones for a long time. “But I was living in East Flatbush and Crown Heights—and there are no brownstones there,” he says. So in 1998, he started driving around Bedford-Stuyvesant just looking for any brownstones for sale. In 1999, he saw one on Hancock Street. “A sign on the house said Citigroup Mortgages,” Mr. Lewis recalls. “So I said to myself, ‘I’m a Citibank cardholder. Maybe I could qualify for a mortgage from them.’” He called Citibank about the house, and the bank referred him to BSDC – who were renovating it.

He came in and put his name on a waiting list for the brownstone. He also took our first-time homebuyer’s course. Then he waited. While he was waiting, we kept in touch and Mr. Lewis attended other home events we sponsored. “And finally,” he says, “there was a brownstone for me.”

BSDC also helped him secure financing. “From the start of the process to the finish, BSDC was with me all the way,” Mr. Lewis says. And with our advice, he secured a mortgage. “My BSDC counselor had three banks for me to choose from,” he says. (Earlier, we had steered him away from a predatory lender.)

“There are so many tools for the first-time homebuyer,” he says. “It’s like they’re taking you by the hand and leading you through the entire process.” For him, the process went smoothly, including the house inspection. “BSDC made sure I was comfortable with the building I was buying. When I had my engineer inspect it, Bridge Street had their engineer there, too,” he recalls. “So if mine had picked up on any problem —anything at all—there was someone there to correct it.”

For Mr. Lewis, the house was worth the wait. “I waited so long for this that I’ll do anything in my power to keep it,” he says. “This house is going to be here, in my family, for as many generations as my family lasts. That’s the most exciting thing about this house for me.”