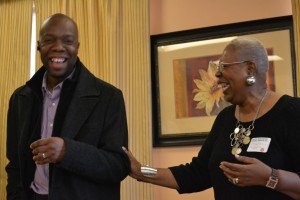 As a child, growing up in the Tompkins Houses in the northeast corner of Bedford-Stuyvesant, young Henry Butler had a dream. “One day, I’m going to own one of these brownstones,” he told himself as he walked past the neighborhood’s hundreds of period homes. Fast-forward to 2005 and, with assistance from Bridge Street Development Corporation (BSDC), Butler’s dream became a reality. He enrolled in BSDC’s popular, long running first time homebuyer education series, where he learned everything there is to know about the home buying process and qualified for down payment assistance when he successfully completed the course. By August 2005, Butler was the proud owner of a brownstone home on Macon Street, perhaps one of those that inspired his dream as a child.

Not long after becoming a homeowner, Butler eagerly joined his block association, an organization that is one of 70 block and tenant associations to which BSDC provides technical and administrative assistance. “That’s where it all started,” Butler says, referring to the beginning of his deep commitment to helping to make Bedford-Stuyvesant a safe, vibrant neighborhood for all residents. As a result of his enthusiasm and dedication, Butler was elected president of the block association. In this role he came to the attention of NYC Council Member Darlene Mealy, who appointed Butler as a member of Community Board 3. After just two years on CB3, Butler was elected chairman of the board, a volunteer position he held until August 2013 when he was hired to be the District Manager for Community Board 3. “It’s a dream come true,” says Butler of his new job. “I’m a homeowner, married, with kids-obviously I’m someone who wants to see Bed-Stuy thrive, to help Bed-Stuy be the best that it can be,” Butler said. “When your job is to help your community, it doesn’t get any better than that.”

Having grown up, owned a home, volunteered, and now worked in Bedford-Stuyvesant, in October Butler made the leap to business owner when he and partners opened Brooklyn Burger & Brew Co. Located at 202 Ralph Avenue at Decatur, this family friendly restaurant and bar features a variety of burgers, including beef, turkey, vegetable, tilapia, and vegetable, as well as soups, salads and more. Of this latest venture, Butler says, “I wanted to bring something good to the community, hire local residents, and give back to my neighborhood.”